google0af8e8a98e33ed8a.html
JUST A DOG
From time to time, people tell me, "lighten up, it's just a dog," or "that's a lot of money for just a dog." They don't understand the distance traveled, the time spent, or the costs involved for "just a dog."
Some of my proudest moments have come about with "just a dog." Many hours have passed and my only company was "just a dog," but I did not once feel slighted.
Some of my saddest moments have been brought about by "just a dog," and in those days of darkness, the gentle touch of "just a dog" gave me comfort and reason to overcome the day.
If you, too, think it's "just a dog," then you will probably understand phrases like "just a friend," "just a sunrise," or "just a promise."
"Just a dog" brings into my life the very essence of friendship, trust, and pure and unbridled joy.
"Just a dog" brings out the compassion and patience that makes me a better person.
Because of "just a dog," I will rise early, take long walks and look longingly to the future. So for me and folks like me, it's not "just a dog" but an embodiment of all the hopes and dreams of the future, the fond memories of the past, and the pure joy of the moment.
I hope that someday they can understand that it's not "just a dog," but the thing that gives me humanity and keeps me from being "just a woman." So the next time you hear the phrase "just a dog," just smile--because they "just don't understand." 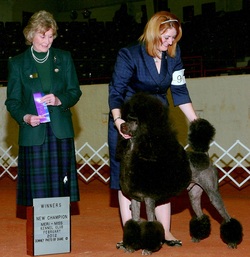 Nino finished his championship at 18 months old with back to back majors in Mississippi the last weekend of February 2012 with very limited showing.  Way to go Nino!   Nino is bred by Ark-Ola Poodles. 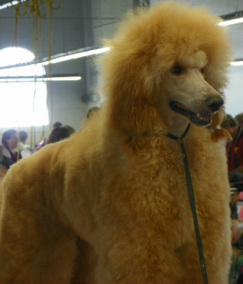 Theo earned his AKC Championship in September of 2013, at 11 months of age with limited showing and impressive majors!!!
Well done!!
Theo was bred by Après Argent and is owned by Kathy Arnold of  Cahaba Poodles.
We are very proud of Theo and his owner!!!    Way to go Theo!   Who says color can't win??  Not us! 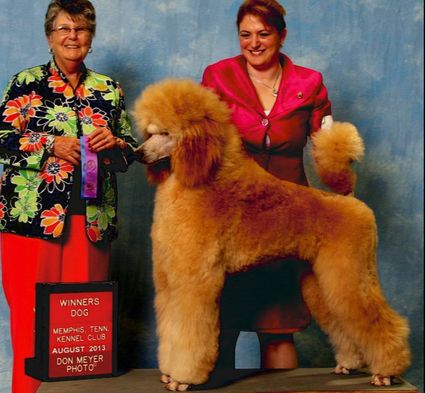 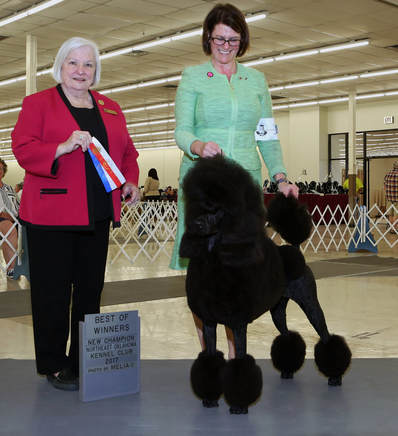 Solo resides and is loved by Co-owner Angela Bieber.  Solo and Angela started their conformation journey together.   Angela and Solo earned a major and a single as a puppy, took some time to grow coat and came back out with Sarah Perchick in March of 2017 and was back home a Champion by April of 2017.   Very impressive major wins!  Way to go Solo!  Congratulations Angela!!  The fabulous Puppy Groom by Cheri Argueta.   Expertly handled and conditioned by Sarah Perchick