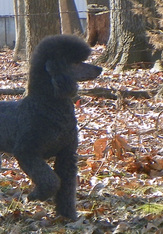 Hip Evaluation
OFA or Pennhip done at 2 years or later but before breeding
Eye Evaluations done every other year or shortly before breeding
Results registered with OFA - OR Results registered with CERF
OFA Thyroid evaluation from an approved laboratory
OFA Cardiac Evaluation or Echo if MVP or ASD is known in lines.
OFA Sebaceous Adenitis skin biopsy;  Inflammatory disease that targets the adnexal structures in the hair follicle, specifically the sebaceous gland. ​
OFA Approved DNA tests for vWD, NE

Standard Poodles used for breeding should have all of the above listed testing.  Testing does not guarantee that a health or genetic issue can not happen but does stack the deck in favor of healthy Poodles.   Much of what does affect Standard Poodles can not be tested for, pedigree research is very important.


Poodle Health Registry
Poodle Health Registry is a wealth of information for further reading about the Health issues of Standard Poodles. PHR is a gift to poodles, it is run completely by dedicated volunteers.  Pet owners play a huge roll in the health of a breed, please report Poodle health issues to PHR.   Link Below.
http://www.poodlehealthregistry.org/docs/Standard/PHRBreed_Listing_Standard.html


Spay and Neutering, when is best?


Dr. Becker: The Truth About Spaying and Neutering
https://www.youtube.com/watch?t=87&v=enPCZA1WFKY

In the last several years there has been much study into the affects of early spay and neutering on the long term health of animals.  We do NOT recommend traditional hormone removal de-sexing of a Standard Poodle.   We DO advocate for hormone retaining vasectomy and OSS (ovary saving) this allows vital hormones to work in your dogs body with no chance of reproduction.   The research is undeniable,  hormone removal increases risk of cancers by 30%,  expression of auto immune related disease is increased by 30 to 50%,  Rate of joint and soft tissue injuries increase by 20%.    Conclusions:  Published 12/16
The data underscore the importance of sex steroids on immune function emphasizing a role of these hormones on tissue self-recognition. Neutering is critically important for population control, reduction of reproductive disorders, and offers convenience for owners. Despite these advantages, the analyses of the present study suggest that neutering is associated with increased risk for certain autoimmune disorders and underscore the need for owners to consult with their veterinary practitioner prior to neutering to evaluate possible benefits and risks associated with such a procedure.
https://bmcvetres.biomedcentral.com/articles/10.1186/s12917-016-0911-5

The study, which examined the health records of 759 golden retrievers, found a surprising doubling of hip dysplasia among male dogs neutered before one year of age. This and other results were published Feb. 13 in the online scientific journal PLOS ONE.
“The study results indicate that dog owners and service-dog trainers should carefully consider when to have their male or female dogs neutered,” said lead investigator Benjamin Hart, a distinguished professor emeritus in the UC Davis School of Veterinary Medicine.    Joint disorders and cancers are of particular interest because neutering removes the male dog’s testes and the female’s ovaries, interrupting production of certain hormones that play key roles in important body processes such as closure of bone growth plates, and regulation of the estrous cycle in female dogs.
The study revealed that, for all five diseases analyzed, the disease rates were significantly higher in both males and females that were neutered either early or late compared with intact (non-neutered) dogs.
Specifically, early neutering was associated with an increase in the occurrence of hip dysplasia, cranial cruciate ligament tear and lymphosarcoma in males and of cranial cruciate ligament tear in females. Late neutering was associated with the subsequent occurrence of mast cell tumors and hemangiosarcoma in females.
In most areas, the findings of this study were consistent with earlier studies, suggesting similar increases in disease risks. The new study, however, was the first to specifically report an increased risk of late neutering for mast cell tumors and hemangiosarcoma.


Is Early Neutering Hurting Pets?   By Alice Villalobos, DVM
This was written in 2008, since then there have been several studies showing there are indeed unwanted consequences to early spay and neuter that diminish long term vigorous health.  Please see the links above and also Dr Zink's paper, link in article below.


Early neutering has become the norm in the U.S. Some states are asking voters
to pass initiatives requiring citizens to sterilize their pets no later than
puberty. Overpopulation is the driver.
But what if large-scale studies found that early neutering jeopardizes the
health of our pets?
What if we found enough epidemiological evidence that early neutering of pet
dogs may open them to orthopedic, behavioral, immunologic and oncologic issues?
A veterinarian who treats canine athletes has raised questions about early
neutering. In an opinion article, Christine Zink, DVM, Ph.D., Dipl. ACVP, weighs
the advantages and disadvantages of early versus late neutering when considering
the performance and health of canine athletes.
The article, “Early Spay-Neuter Considerations for the Canine Athlete: One
Veterinarian’s Opinion,” appears on Dr. Zink’s website. Click here to review the thought-provoking
article and to look at the references.
Zink assembled 18 references to support her article. Some show that dogs
spayed or neutered early are taller than dogs spayed at an older age. Zink notes
that sex hormones have a role in bone density. She concludes that the structural
and physiological differences in dogs neutered early may be the reason
veterinarians are seeing a higher incidence of orthopedic disease such as CCL
rupture and hip dysplasia than in dogs neutered after 5 1⁄2 months of age.

For the past 30 years, our profession has urged the public to spay and neuter dogs and cats
for a host of beneficial reasons, including population control and the avoidance
of breast and testicular cancer. With client education and marketing, our
profession has succeeded in making early spay-neuter programs our national
custom, primarily for control of the population explosion.
Shelter medicine experts developed the concept of ultra-early neutering of
kittens and puppies before adoption. This practice was embraced by thousands of
rescue organizations across the nation, including the Peter Zippi Fund for
Animals– founded in 1977 by yours truly–which has rescued and placed more than
11,600 animals.
Our organization looked at the data and felt that early spay-neuter was the
best answer to address the horrible situation in American shelters, where
animals are euthanatized because they were born feral, dumped or unwanted.
Mounting epidemiological evidence shows that we might be jeopardizing the
well-being of pet dogs with the early neuter policy. The data are not persuasive
for felines, but there are some issues with the size of the urethra in early
neutered tom cats that may affect their health.
My special interests in practice have been cancer medicine and pet hospice.
It is earth shattering to consider that some of the cancers we have been
battling may have been enhanced by early neutering instead of the reverse!
Zink points out a retrospective study published in 1999 by Ware, et al, that
found a five times greater risk of cardiac hemangiosarcoma in spayed vs. intact
female dogs.
Hemangiosarcoma is one of the three most common and devastatingly fatal
cancers in larger dogs, especially German shepherds and golden retrievers. We
see it most commonly as malignant growths in the spleen, but 25 percent of cases
involve the heart and 25 percent appear in multiple locations.
Ware’s study also found a 2.4 times greater risk of hemangiosarcoma in
neutered dogs as compared to intact males.
This information has been around in journals for almost a decade, but it
takes time to consider large epidemiological studies as evidence-based medicine
useable in decision making.
A 2002 epidemiological study of 3,218 dogs done by Cooley and Glickman, et
al, found that those neutered before age 1  had a significantly increased chance
of developing osteosarcoma. Another study showed that neutered dogs were at a
two-fold higher risk of developing osteosarcoma.

Lack of Proof
We need to re-examine the common belief that
neutering dogs helps reduce prostate cancer. In fact, Obradovich, et al, in 1987
reported that neutering provides no benefit in protecting dogs from prostate
cancer. Neutering definitely offers protection from recurrence of androgen
hormone dependant perianal tumors.
Clear epidemiological evidence exists that female sex hormones cause mammary
cancer. There is a slightly increased risk of mammary cancer in female dogs
allowed to endure one heat cycle and the risk is increased with each additional
estrus until the dog is 21⁄2 years old.
In dogs, 30 to 50 percent of mammary tumors are malignant. In cats, the rate
of malignancy is 95 to 98 percent. Therefore, all mammary tumors in dogs and
especially in cats should be surgically removed and biopsied as soon as they are
detected. Early detection and excision can improve the prognosis.
It is well known that the incidence of urinary incontinence in early-spayed
female dogs is higher than in non-spayed female dogs. This is due to the role
that ovarian hormones play in the maintenance of genital tissues and urogenital
contractility.
Aron, et al, in 1996, reported that male dogs neutered early had an increased
risk of developing urethral sphincter incontinence. A health survey of several
thousand dogs by the Golden Retriever Club of America showed that spayed or
neutered dogs had a greater risk of hypothyroidism. In 2001, Howe and Slater
reported an increase of infectious diseases in dogs spayed or neutered at or
before 24 weeks of age versus over 24 weeks of age. The 2005 AKC-Canine Health
Foundation reported a higher incidence of vaccines reactions in neutered dogs as
compared to intact dogs.

The Vaccine Question
It is evident that we need more information
and more leadership from our academicians to clarify our positions on early
neutering. This reminds me of the profession’s dilemma over the issue of using
certain vaccines that were known to be potentially carcinogenic in 1 in every
1,000 to 10,000 cats.
If it was your cat that got feline vaccine-associated sarcoma, it is a huge
and important issue. The actual rate of disease is difficult to assess and is
most likely under-reported in pet animals, given the stringent requirements of
informatics reporting.
Many organizations that breed service dogs, such as Guide Dogs for the Blind
and the Morris Animal Foundation are keeping records that may answer these questions.
I suspect that the abnormalities discussed above are real and underreported
in the veterinary literature. The best thing we can do is to advise our
concerned clients individually, looking at each animal’s role (agility, sports,
jogging buddy, sled dog, service dog) within the human-animal bond.

Alice Villalobos, DVM, offers insights into the human-animal bond, animal
welfare and the relationships among pets, owners and veterinary practitioners.
She is a member of the American Assn. of Human-Animal Bond Veterinarians and is
on the editorial review board of the Society for Veterinary Medical
Ethics.
http://www.veterinarypracticenews.com/vet-practice-news-columns/bond-beyond/is-early-neutering-hurting-pets.aspx